How a Pool Party can Lead to Being Face Down with White Knees in Your Back...

Many of us watched the video in horror, where in McKinney Texas, police appeared and after being called (according to some because there were too many Blacks), without speaking to the organizers - took the the word of white residents, terrorized youth because of a disturbance at a public pool.  The widely shared video shows teenagers running and police chasing.  Police cuffed those they caught. The teenage girl who was the subject of the video repeated, “they weren’t doing anything”. Like her I also wonder why random teens were being cuffed?! According to an eye-witness, the same teenage girl dressed in a two-piece bathing suit said "By my momma, this isn’t right." The officer ordered that fourteen year old to leave and when she did not obey, the officer grabbed her by the hair, twisted her arm back and forced her to the ground. When horrified bystanders, tried to intervene, the police officer pulled out his gun, pointed and waved it around - warning off any intervention. He then returned his attention to the girl, kneeled over her, pressing into her back, while surveying others- hand ready at  his gun. 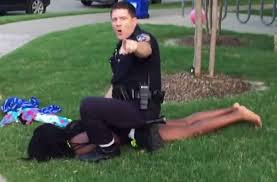 Initially, I wondered if police in Mckinney had not been trained to deal with conflicts in communities.  Were they told they would be dealing with teens?
According to Cheryl Dorsey on Democracy Now;

He’s a training officer. I am concerned because we also see him on video barking orders to the junior officers, go get that mf-er. And they just followed him blindly. So I’m wondering if this isn’t a problem that is maybe systemic throughout the department. If this is your police officers are training younger officers, is this condoned? Is this behavior appropriate? I think not. How does any human respond to a young girl calling for her mother? Or did the officers see a black body that refused obey his order?

There is a clear problem in police training and not only in Mckinney, Texas.  Casebolt's behavior was tolerated as recent.  As reported, he had previous complaints and was sued for racial bias. The fact that he was even on the job and a training officer suggests that Mckninney police department were aware of the possibility and potentially complicit and responsible for his actions.
Former police officer Dorsey argues;

"...  as I watch officer Casebolt, what I see is a bully. I see someone that was totally out of control, that was similarly focused on every African-American youth that he encountered. And then he paid particular attention to this young woman. Why? Because she failed to follow his orders. And what we see is what I like to refer to as contempt of cop. When you don’t do what an officer says, there’s a price to pay. And we’ve seen it over and over. Generally, we’ve seen that that price is death. Thank goodness no young person lost their life in this incident, but he punished her. He sat on top of her with the full weight of his body to make a point. And it was unnecessary. It was over-the-top, outrageous, and he needs to be fired."

My experience and the experience of others like me insist that race is central to everyday encounters in the world.  I think of what Cornel West describes in Race Matters, as the absurdity of the black experience. Any venture into the world, the life of a black person is more likely to be visited with violence and even end in death. The normal rules don’t apply to you. So when the Mckinney teens were invited to the pool party to celebrate, one could reasonably expect an argument because things happen with teens. As a former high school teacher, I can say that conflict happens with teens who have raging hormones and are learning how to control their emotions.  Yet, this, in no way justifies how police behaved.

19 year old Tatiana, one of the pool party organizers, didn’t expect the argument that began because of racial insults hurled at black teens by a white woman at the pool. But we have come to expect, because of our race, biased and brutal treatment by police and many others that we encounter .

I first heard about this police violence from a friend and later  saw the video which suggested  the reason for the presence of the police was: “ neighbors called police because too many black people..."

This  reminded me of the time I spent at University of Toledo - when I went outside for a smoke break and the police approached me.  They asked who I was- I told them I was a teaching assistant.  When I asked what this was about, they told me “someone called and you looked like you did not belong”.

As well, when Walmart customers called the police on John Crawford, while he played with a toy gun, insisting he was dangerous point to the absurdity that your (black) life is often in danger simply by being present.

Not to mention the fear of whites that play into the racist behavior - the absurd is always present, so when Oscar Grant in Oakland,  Jonathan Farrell in Florida and Mike Brown in Ferguson mounted what should've been an everyday venture into the world, ended in death. This not only gives me pause, but it causes me to reflect on the perception many buy into -- while ignoring the white on white violence and criminality of those communities because are they not targeted. One drug enforcement agency officer describes how he was told to avoid white neighborhoods despite high levels of the evidence of drug use and trafficking.

While these are all poignant issues- my concern goes to black personhood. That to the broader American public- who are often afraid of our very presence and are silent as our communities are occupied and often terrorized by standing armies.  When will moderate America be outraged by militarized police, whose behavior not only trounces the rights of urban dwellers, but has potential to do so to anyone, when convenient.

What Mckinney's police violence and the recent tasing of my close friend make me consider is:

1. Black lives have no meaning or importance to the broader society, despite one’s education or status in the community (not that it should matter)- as a Harvard professor who was arrested in front of his own house can attest. The lack of importance to our lives is highlighted and reinforced when the perspective of the whites were taken by the police in the pool. This is illustrated by the history of all white juries where Blacks were not allowed to serve- their word was not important and could not be trusted. The history of Texas pools point out how one community's white members voted to sell the public pools- rather than allow Blacks.  Bad behavior by Eric Casebolt,  only few hours ago to caused him to resign.

2. Every black person is simply a black body- exhibiting the same characteristics of every other black person, thus a criminal threat, dangerous and feared. The ABC experiment about racism shows implicit bias against a black male similarly dressed to a white male.


The young white male was given a pass while stealing a bike, while the black male was accosted and  had police called on him.  Even a black couple passing assumed that white man breaking the chain securing the bike was not stealing.  In Mckinney, Casebolt's rage, which was directed and arguably harsher to the black teenage girl points to an often ignored experience.

Black women often face an even harsher reality. The teenage girl in McKinney was punished and brutalized with her face forced to the ground- even though she was still wearing a swimsuit. Essentially, she was put in her place for daring to speak out/disobey the order of Casebolt. All of this took place while another unidentified white male citizen stood by, apparently protecting the Casebolt while he terrorized these teens.  The bodies of black women are not only brutalized (University of Arizona professor ), but ridiculed - see the disgusting characterizations of Serena Williams. The violence against Black women is experienced through characterizations of them as loud,  aggressive, and overly sexual. This is then compounded by the failure to recognize  their murders and violence against them, as recent black lives matter protest have highlighted.

3.  This result in the possibility that our lives can be extinguished at any moment leads me to deep existential crisis about the world, having children, the lives of my nephews, nieces, friends and students. The collective experience, of which I am included, illustrates racism affecting the very existence of the entire black community resulting in a very profound existential anxiety. When police arrive we run.

Yet, its important not to run, but continue speaking truth, nonviolently resisting violence and encouraging our white allies to educate whites about this bias against black lives, which is engrained in the structure of American society. Whiteness in the case of Mckinney, TX and many other places means violence against Blacks-- where our side of the story, our bodies and experience don't matter. We are not empathized with or considered human and this is why it is so easy to call the police or use violence against us when we are present. Our presence is in many cases not tolerated.  I believe  Jordan Davis was not only killed for playing his music too loud, but for his refusal to obey the authority of whiteness and for simply being present.

I continue to be committed to Black Lives Matter- as our lives represent the least considered in a global hierarchy where blackness is considered evil, ugly and undesirable. America has yet to admit and act against the violence, by police, that it supports through silence. As well, police often point out that they are only doing a job that the rest of America sanctions. But until the rest of society realizes that its' complicity leads to our existential crisis, for which we find our presence in question and lives threatened,  this nation can never be what it claims (a freedom loving democracy), nor can it live up to its great possibility.
Posted by Dave Ragland at 10:01 AM

News about the movement!